Egypt: Things to See in Cairo

Perhaps you've heard of a little thing called The Pyramids..? 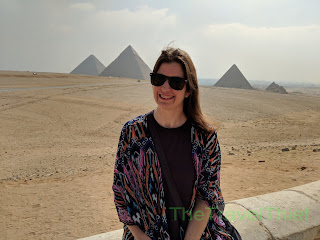 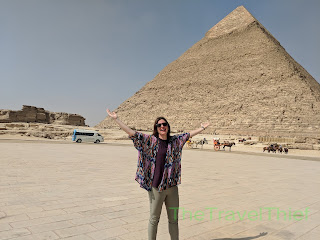 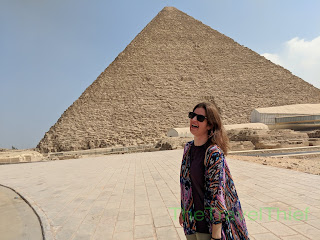 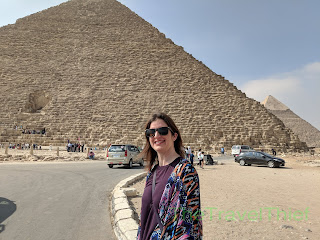 And we're done here with things to see in Egypt.


JUST KIDDING.  The pyramids are great, but there are so many antiquities and other interesting things that sometimes get lost behind these giant 3D triangles. You shouldn't try to just check something off your bucket list and not see the other things Cairo has to offer.

Pyramids
So there's not much I'm going to say about the history because that is not what I am here for.  I do recommend not to go it alone - book a tour. Yes, you can arrange things while on site to take a camel or horse between the pyramids, but honestly, the sites have gotten a little less relaxed about just strolling though. Even at the first pyramid between the last time I visited and now there was some scuffle about payment and wanting to walk through.  Well, we found out because there is a shopping street between the entrance and exit.  My driver and friend got into a "discussion" we'll call it when we didn't want to go up to the 1st pyramid.  Plus if you are on the tour you are not waiting for the ticket in a line etc.

If you are wondering about walking between the sites, I wouldn't recommend it though I have not tried. Normally I walk any place I absolutely can. It's not that it's a particularly long distance or that the desert itself is taxing (which it was this last time in August) but there's something uncomfortable about it.  The narrow road is for the tourism vehicles, the sand is not that dreamy Sahara texture you can stroll through. There's bound to be constant hawkers trotting up to you offering services.  It's not a picturesque walk because you can see the Pyramids from anywhere.

Can you go in them / on them? Officially "no" on the ON them but the guards will let you climb up a little bit if that's your thing.  My first trip to Egypt I pretended to do so because what was the point of climbing up a few blocks vs staying on the ground if you couldn't climb to the top?
IN them is a yes, but you'll have to pay an extra entrance and there's really not much to see.  Been there twice, been in zero pyramids.  But, if this is your only trip to Egypt ever and you want to say you've been in a pyramid, then do it.  I didn't want to wait in line, climb into a stuffy stone structure and deal with getting money out after I had been in the tombs in the Valley of the Kings (totally worth it).

Sphinx
"Which Creature has one voice and yet becomes four footed and two-footed and three-footed?
In mythology, the sphinx had a head of a human, a body of a lion and sometimes wings of an eagle. If you cannot answer the riddle the sphinx places forth, you will be devoured by the sphinx.

I have no idea how you would get between the Pyramids and the Sphinx if you were not in a vehicle to be honest. 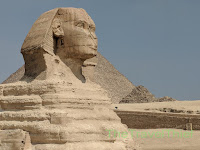 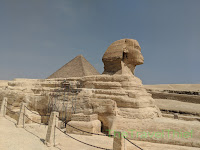 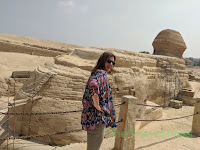 I want to prepare you for the Sphinx. You've gone to the Pyramids and they have been amazing. The Sphinx is not as impressive as pictures. It is smaller than you think and normally with a standard number of tourists you are vying for a spot at the fence. Having already been to the Pyramids, you're let down.  Then, because it is a fragile beast, it is almost always under some sort of scaffolding for restoration. Please set your expectations low so you can enjoy because it is impressive when you really think about it. I was so fortunate this time to see it this time at the point of low tourism and went in with the expectation from having visited before.  As a second time visitor, I enjoyed it more this time around, maybe more than the pyramids even because it was more tranquil.
Something to note is that you will need you ticket from the pyramids to enter. This last visit, the ticket checker was the most hilarious and friendly person I met in all Egypt which is saying something since the Egyptians have a lot of character! You will go through a stone temple that doesn't have much to see at this stage of its life. When you depart, you go through the typical tourist shop alley.  Oddly enough, this time no one approached us to buy the sun-baked, dated souvenirs they had probably from before the revolution.  Either it was too early in the day when I was there or they are the only vendors in Egypt that were getting a decent amount of business as being in a tourist and the chronological end of the visits. 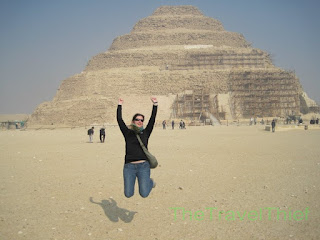 Another must do in Cairo is to leave the downtown area and do a tour of Memphis & Sakkara.  The Sakkara site consists of some of the earliest Egyptian funerary structures. The Step Pyramid of Djoser is the main reason you are here and you can see that 'earliest' equals constant restructure/renovation.  I think at one point you were actually able to climb on the pyramid.  I could be making that part up... Regardless, this is all to say don't be disappointed in the site after seeing the pyramids in Giza. There are some other smaller pyramids and tombs there too and a lot of neat history.
On to Memphis. This was once the capital of Egypt (See?  I gave you some history even though I said I wasn't going to!).  Compared to the other sites, I consider it calm with some greenery and statues.  The main thing to see is the giant statue of Ramses II. Here it is pictured from the second floor of the open air museum. 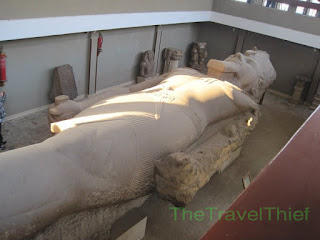 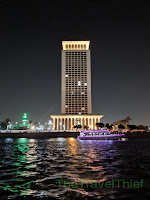 You have to be careful that something like this doesn't turn out to be cheesy. I have to be honest, Cairo is not somewhere that I would be going out on my own at night. As much as I loathe to do anything that involves a boat and dinner show, the one I went to was enjoyable.  There aren't many landmarks that you float by down the river. I consider it's really a chance to escape the oppressive traffic and have nice glide down the river. 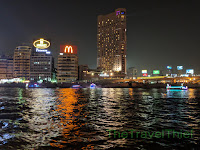 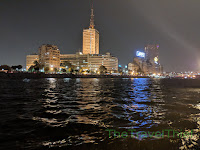 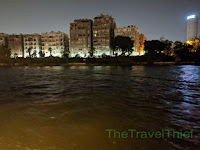 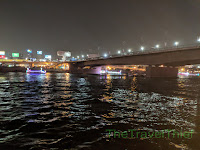 I had a nice dinner with a salad bar buffet plus a plated meal of my choice.  There was live music, though some of it was versions of contemporary songs and not traditional tunes.  The entertainment consisted of of the 'whirling dervish' which is nothing like what you would see in Turkey.  The ones you see in Egypt have colorful outfits and do more acrobatic moves.  There's also a belly dancer which can be entertaining or awful.  Mine was the former.  She danced very well and wore tasteful outfits.  Was not the case of the belly dancer I saw during the Nile cruise in Upper Egypt... 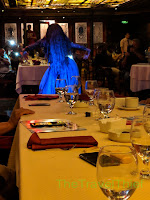 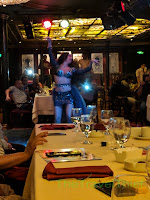 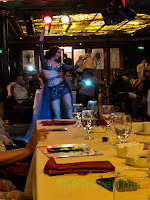 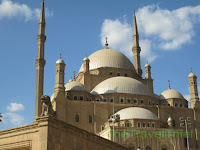 The Saladin Citadel is located in central Cairo, but up on a hill.  This gives the opportunity for stunning views of the city and another chance to play the game "Can I see the pyramids from here?".  The citadel consists of a few different complexes but you are mainly here to see the Mosque of Muhammad Ali AKA the Alabaster Mosque. If you've been to Turkey, you'll note similarities between this mosque and the Blue Mosque in Istanbul.  Same architect! 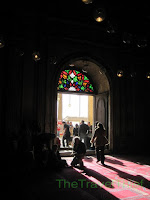 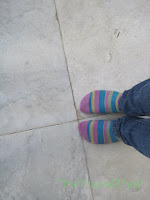 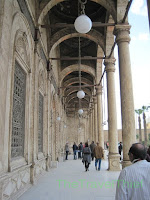 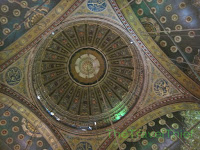 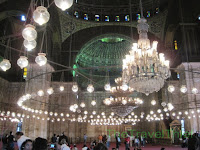 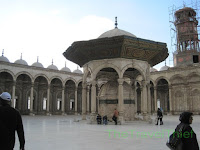 It is beautiful and not to be missed.  This is something that you could definitely do on your own by grabbing a cab to and from the site.  There's something to be said though for having a guide to explain the history and architecture. As mentioned, there are other sites in the complex, such as the military museum.  I have not personally visited that one, but have seen others mentioned they enjoyed.  Something to add to the list for next time!

Egyptian Museum
Officially known as the Egyptian Museum of Antiquities. This is an old museum, but hey, all of the artifacts in it are old too so it's in good company. ;-)  It's stuffy, dusty, it smells funny and it was definitely looted during the revolution, but you can't find these items anywhere. It is well maintained for what it is.
The future of this museum depends on what is actually going to happen with the NEW museum that is being built out in Giza.  That museum started back in 2012 (I think? I'm terrible with dates which I why I'm no historian!) and the projected opening keeps getting delayed.  Some say the end of this year (2018).  I'm seeing notice about a soft opening during Spring of 2019.  I saw the building site and I think there's no way it's going to be open even next year. I also don't think that they will completely shut down the current downtown Egyptian Museum once the new one is open.  Some of the items will definitely move, but I think for historic value the old museum will remain operational.

Khan el Khalili Bazaar
Look, I'm not a shopper so unless it's purely a food market, I never enjoy these places. I've seen multiple people go gaga for shopping or haggling in these markets. The atmosphere is neat as you feel a bit like you are transported to another time.

Cairo Tower
This isn't one that you see on most tours - and for a good reason.  The access would be very difficult.  I went with 25 Egyptian colleagues and it was a tight squeeze to get us all in the elevator even in shifts. Plus the bus couldn't go down the access road making it a small walk down the actual road and I don't recall sidewalks. The views are stunning on the outdoor terrace (Yes! You can see the pyramids but the haze makes it difficult). There are two places for food; One being more a cafe style option and the other being a more upscale restaurant. 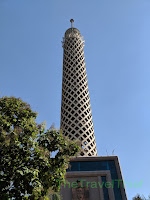 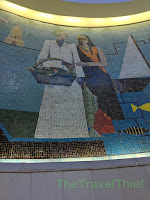 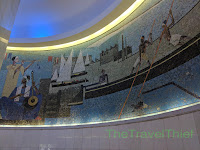 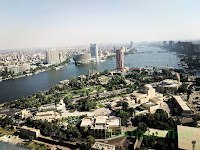 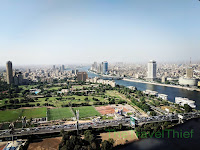 That sums up my very brief synopsis of Cairo sites. Hopefully this gave you a little tast of what there is to do in Cairo. I'll circle back a little later on to the sights to see in Upper Egypt but I didn't go to Luxor or Aswan on this trip.