The cold weather has me thinking about my trip to China 4 years ago.  It was for work and I am glad it was because it meant it was a short trip with purpose.  I didn't enjoy China like elsewhere I've traveled but that's a story for another day.  What I DID enjoy was the Chinese hot pot meals I had.
Chinese hot pot dates back over 1000 years when the Mongolians invaded.  This just shows  how much food transcends borders since the Chinese built a wall that can be seen from space to keep the Mongolians out, but absolutely love their hot pot. My colleagues could not stop talking about it and ate it multiple meals while I was in Beijing.
It's not hard to see why it's such a star of Chinese cuisine.  I was in China in November and it was colder that usual with a strong, biting wind.  After a 14 hour flight, I met my local colleague for my first taste of it.  He and I had met before, but hadn't worked together extensively.  The hot pot served as the perfect icebreaker (especially given the jetlag).  When there was a lull in the conversation, you could focus on what was going on in the pot.

It's a simmering metal pot placed at the center of the table with raw ingredients (meat, veggies, etc) to be cooked placed around it. Part of the fun is trying to fish out the food you put in and potentially lost after it starts to boil. There are of course regional variations with what the broth is made out of and what you put into it. I tried the Beijing mutton hotpot and the Sichuan hotpot.
First experience was the mutton hot pot in a restaurant near my hotel in Wangfujing. This area has a lot of students in the area so it was a more modern vibe in the restaurant. The hot pot was a very simple metal pot with bone broth and spices such as shallots, ginger, loganberries, and dried shrimp.  We asked for extra spice so they threw some peppers in there, but it didn't add too much heat.  Thank god for Chinese Fire Water. ;-)
The last hotpot I had before leaving Beijing for Shanghai was the Sichuan hotpot which embraces the spicy flavors of that region. I was with my colleague and a partner from another company.  I had been fortunate to visit during a time when foreign dignitaries were in Beijing which significantly reduced the traffic. This was huge. It means I finished two days of supplier visits and meetings in one day.  That meant I got to visit some different areas that tourists visit and in effect, seeing some tourist sights.  With this, I went to three different sections of the Great Wall of China.  Recall that I said earlier in this post that it was November and colder than usual.  While I loved seeing these different areas, I was frozen and wanted nothing more than to take a hot shower and go to bed.
My colleague said we were going to lunch about 2 exits in the opposite direction to go to a town that was known for their hotpot. I was irritated, but didn't say anything.  We pulled up to a place that looked like a banquet hall from the 1980's with cars parked haphazardly in front of it.  We went inside, the host eyed me up suspiciously but I kept my mouth shut (OK, it was frozen because I was so damn cold).
My colleagues graciously asked what I wanted and I said "hot" because my bones were frozen at this point. They were delighted! One of them was a little nervous about the spice so they decided on a split pot to have half with the Sichuan hot pot and half with something milder.
This was definitely authentic. Children (as well as adults) STARED at me as the only Westerner in the restaurant. We got to our table and it was filthy.  Food from the last customers were cleared.  No one seemed bothered by this. We were served new chopsticks and the hotpot was placed there with plates of thin sliced lamb bits and vegetables to cook.  The interior was delightfully humid where I could warm up and shed some layers.  All the windows to the outside were fogged up from the hot pots.
I wish I remembered the name of the town because it was well known for that, but not something tourists would ever find.  I also wished I wrote down all the different things we put into the pots, plus the sauces etc.  But these were the days before Instagram for me so the below is all I have of my hotpot culinary adventure. 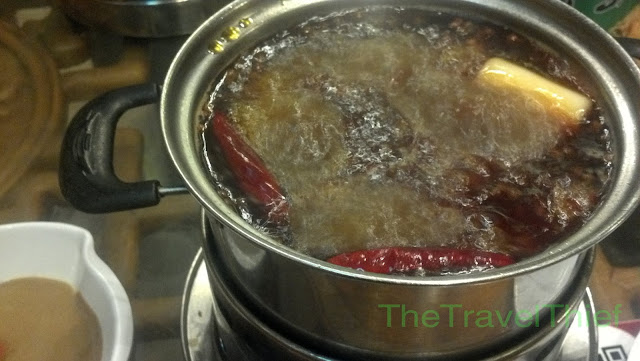 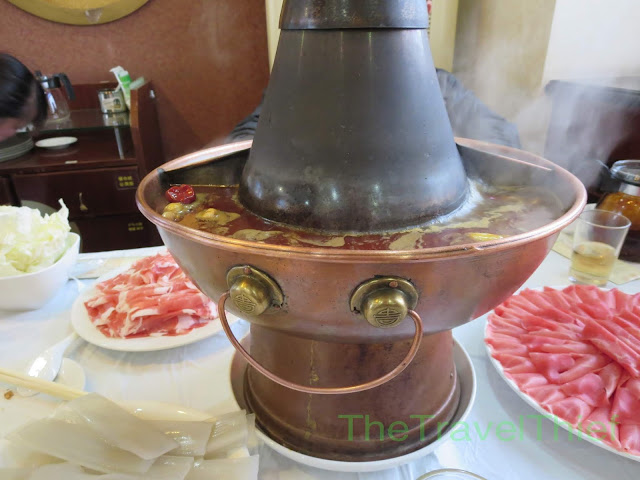