I will admit that I am not someone who knows how to enjoy "Sun and Fun" types of vacations.  That being said, once a year we go somewhere that specializes in that with a fun group of friends and have a blast.  This year we went to Aruba and stayed at the Riu Antillas Palace hotel.  It was all inclusive and adults only which was a selling point for us.
Anyone who had been to Aruba before thought we were crazy for staying at an all inclusive on the island.  The food on the island is great quality and there are lots of choices.  However, the value of this resort to keep the trip affordable because the one night we went out was expensive.  Plus, with 6+ people, coordinating 3 meals a day plus drinks, snacks etc is too much hassle on a short trip.  When we wanted lunch, we spent exactly 10 mins gathering together, brushing the sand off and getting seated at a restaurant.  We all could do our own thing and not have to worry about
This was my first time at an adults only resort and I had mixed feelings.  I thought it would be quieter without kids running around all the time, but instead it was some sort of midlife spring break.  The resort actual has policies against spring breakers if I remember correctly from their website.  It was LOUD - lots of music and lots of drunk adults.  Granted, there wasn't anyone running through the hallways or making a ruckus in the middle of the night.
The hotel itself has older "bones".  The building opened in the 70s as the Aruba Concorde Hotel.  Riu took over maybe 10 years ago and I saw the last renovation listed as 2014. That would be the biggest downfall of the property, the age shows.  It the lobby, the air conditioning system drips onto the floor and if you look at the ceiling, the wear and tear from this is evident.  There doesn't seem to be a proper luggage room.  Before check in time, the bags are all stacked in the middle of the lobby.  It makes the lobby feel really closed in as well as the issue of not having a ton of security with only the staff watching the bags instead of an actual locked room.  The front desk staff is friendly but inconsistent considering 3 couples got 3 different versions of information.
The lobby bar is small, but they make the best drinks on the resort.  The food is actually great with lots of choices.  For lunch and breakfast, it is buffet restaurants with some cook to order stations set up.  We could also go over to the sister property next door to the buffet restaurants which was nice to mix it up.  Dinner there is also a buffet, but there are 3 specialty restaurants for served dinners: Italian, Fine Dining/Fusion, and a steakhouse. They don't accept reservations, it's first come first served which had some people lining up. The great part about not taking reservations is that on a busy Saturday night, we could put our name on the waitlist and they gave us a buzzer for when our table was ready.  This gave us the flexibility to go have a drink while waiting and the only caveat is that you had to be there within 15 minutes of the buzzer going off.
The rooms are a good size, but old.  There was a popcorn ceiling.  The bathroom felt dated.  The beds were super saggy and the linens scratchy.  The balcony with the ocean view was a huge plus, especially considering you could not see your neighbors from it.  The hallways had musty carpet that was pulling in some areas.  This being said, all of these areas were exceptionally clean.  Especially considering the one day I dumped a gallon of sand out of my bathing suit onto the tile floor, the cleaning staff is fighting a constant battle.  There are also little touches like the towel animal with chocolate in the room at check in and the nightly turndown service. I had an extra blanket on the bed that they made into it for the duration of our stay.  We had one bottle of water in the fridge and one bottle out and as they refilled nightly, they followed this pattern.
The outdoor spaces were also clean.  The pool was a little less so, but impressively, the beach was very clean.  One thing I couldn't stand was the drinks in flimsy, non-reusable plastic cups.  There were some stands to "recycle" the cups, but no one was really using them and I am skeptical as to where the cups went.  The only other thing about the outdoor spaces was the inconsistency in the bartenders. Some made drinks really strong (too strong for me!) so made excellent drinks and some made margaritas with lemons and vodka (seriously).
Verdict: I think Aruba is new to the All Inclusive game as there are limited options.  The Divi Phoenix next door did NOT look remotely as nice for a similar price.  The Riu has great food and service next to beautiful beaches for a good price.  I wouldn't hesitate to go back to this property. 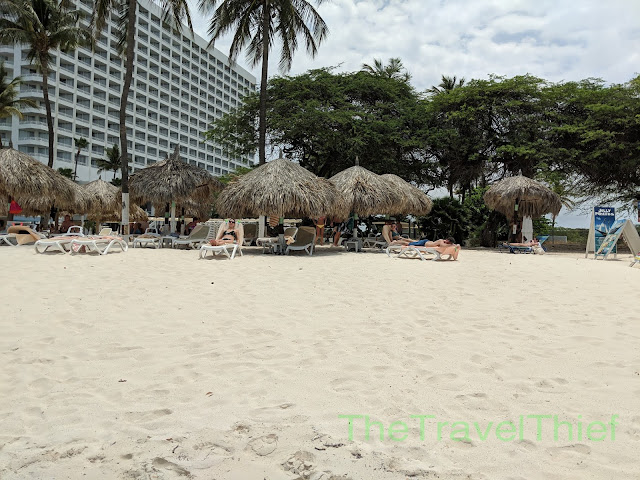 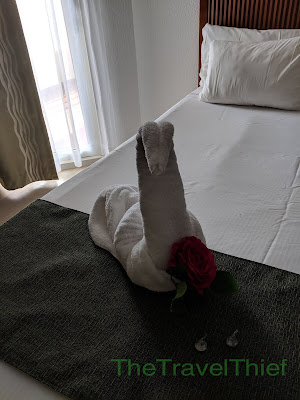 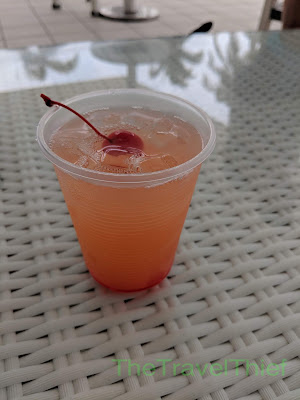