I'm an anglophile.  I blame my mother for raising me on PBS shows in the 80s which were almost completely British programming.  Considering that this was a time before cable, it makes sense given the lack of options coming through on the antenna.
One of the things I was looking forward to in Hong Kong was some of this British imprint on Chinese culture. Even though the British officially departed 20 years ago, this tradition of afternoon tea has taken hold in Hong Kong.
Hong Kong definitely has a strong tea culture in general (I love milk tea! More on that at a later time) so it is no wonder that this remained.
Afternoon tea is credited to the Duchess of Bedford for beginning this trend. Dinner used to be late and large so getting there from breakfast was a challenge.  The Duchess of course was having her dinner fashionably late as was the style of the 1800s, but we girls all know that you're going to get hangry waiting that long. Thus, afternoon tea was born! Though there seems to be other theories that it began before that time and even that it may have begun in FRANCE.  I don't believe the English enjoy that last bit.
In Hong Kong, it has remained true to the British roots of it and is a refined experience.  Refined unless you turn up to the Peninsula Hotel and see a queue through the back of the hotel.
My husband and I had been walking around all morning, it was a Saturday and the Peninsula does not take reservations unless you are a guest at the hotel so I did not have high hopes.  It was however worse than I expected.
Walking into the lobby, you are greeted by the famous string quartet.  Once you gawk around, you see about 30 people standing in front of the musicians taking pictures. Then you notice the noise of people talking.  The lobby has incredibly high ceilings and the noise level was akin to being in New York Penn Station.  No exaggeration.  There are hundreds of people already seated in tables close to each other and servers are clearing and setting tables with lightning precision. Hmm, maybe we can try to get in here based on the sheer volume of tables available and the efficiency of the staff, but it's not exactly the classy experience that I was hoping for.
We then get into the line that we saw queuing on the one side of the lobby.  It didn't look too bad but then we were located at the doorway with more people filling in behind us.  Hotel staff then came to direct people in line in order to keep doorways clear.  It was at this point that we heard something that sounded like "half hour" for the wait.  Well, that's not bad at all, but we weren't sure if it was truly a half hour or one and a half hours.
Then the staff told someone again it would be a two hour wait.
TWO HOURS?
For TEA?
Okay, and some snacks, but I'd be paying 350 HKD for the privilege after waiting in line for TWO HOURS. It's not Disneyland! I wouldn't wait 2 hours for a ride at Disney either to be perfectly honest, but that's a whole other ball game.
I quickly did a google map search of where afternoon tea could be had in Kowloon with the resignation that we could always go back to our own hotel and get pastries.  Ritz Carlton was a bit too far with all the walking we had done in the morning and of course there were no guarantees that we would be able to get in there.  I then saw the Langham come up on my map less than a half mile away though not as a tea venue.  I've visited the Langham in London - actually, it's one of my favorite hotels in London - and I knew they absolutely had to have a tea service.  The hotel's website informed me that they did indeed serve afternoon tea identical to what they serve in London in the Hong Kong property's Palm Court. 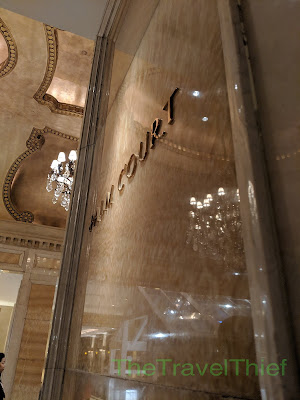 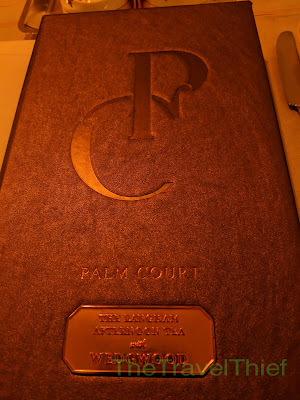 He apologized for the poor location of the table as it was against the wall and the harpist was directly behind my seat.  I actually found the harpist's location to be a bonus and we were a little bedraggled from walking around all morning.  Probably best that we were hidden from sight. 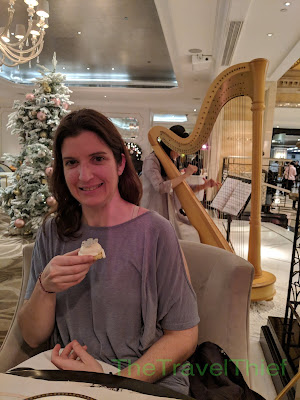 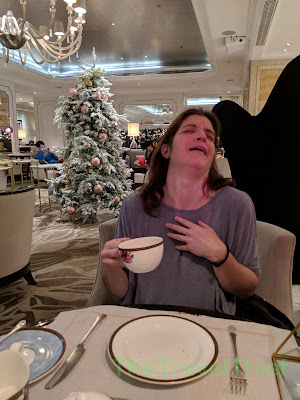 The menu was holiday themed, but it's based on the traditional Langham English tea that has been served at the London location for 150 years. It's served with Wedgwood and in fact, there is a special "Langham Rose" pattern of the tea ware. 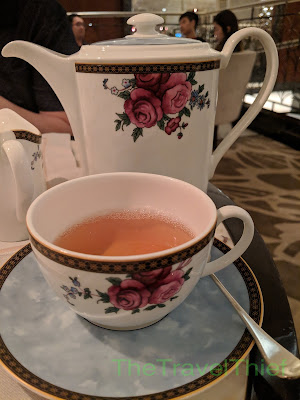 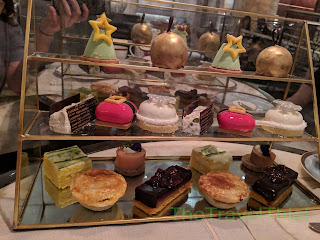 I am an Earl Grey fanatic so I opted for the very normal Earl Grey.  The Hubs did a fruity rosy blend.  I said it was The tea came out followed later by a contraption that held all of the snacks (petit fours?) to enjoy with the tea.

THEN a basket of scones came out, which we instructed to eat warm. Perfect. 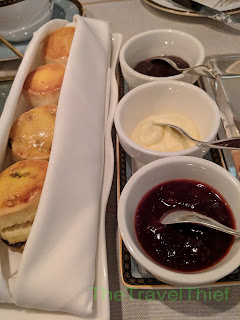 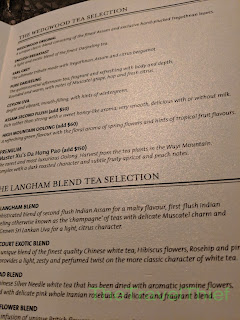 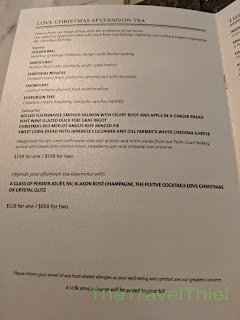 At the end of our meal (and it was truly a MEAL), we could have gotten more water for our tea and stayed longer.  I would have planned much better if I knew the Hubs was going to also enjoy it.  Must do in Hong Kong!!