Egypt: The Return of Tourism - is it safe?

I just returned from a trip to Cairo for work (and by just, I mean I actually walked in the house less than an hour ago from getting back from the airport).  In a case of pure coincidence, I was the last person from my work to be on one of our tours in Egypt in January 2011 and I am the first one to be back since the revolution.
If you are hazy on the details of what happened in Egypt and throughout the rest of Northern Africa/Middle East then, here is a little infographic timeline that breaks it down: https://www.slow-journalism.com/infographics/society/arab-spring-timeline

A question I get a lot - besides 'where is your favorite place?' of course - is IS IT SAFE?  I really don't like to answer that question because some of it boils down to personal feeling. I've spent my entire life living in or around major cities and am more accustomed to the things that come along with city life. These things that don't bother me may be unsettling to some; Traffic, noise, graffiti, sensory overload, exposure to unfamiliar cultures.  The last one is because people are sometimes uncomfortable with seeing something that is common in another culture and misinterpreting it for something else.  For example, have you ever been with someone that talks to a person in a different language than your own and thought that they were having a heated argument only to later realize it's just the way that language sounds in your ears?  That's what I'm talking about.

A large part of answering IS IT SAFE is acknowledging that things can happen anywhere.  I'll reference my first trip to London back in 2010.  It was for work and I stayed in the Westminster area part of the time. This was beautiful for a first time visitor to London to be in the heart of the iconic sights such as the Houses of Parliament and Big Ben.  I was returning from my work day midweek via the Westminster tube station and walked along the road that is parallel to the Thames River.  It goes past Westminster Abbey and the Houses of Parliament and turns into Millbank Road.  I had been doing this the past two days and was enjoying looking at the leaves fall off the London plane trees that lined the street.  I started to notice that there were a lot of people coming the opposite direction towards me down the middle of the street.  I had been seeing people in the area dressed in business attire Monday & Tuesday night doing this in order to get to the tube station and return home after work.  However, this time it felt weird because these people were almost silent and walking slowly. I still didn't really think that anything was wrong, even with some police presence among us. Well, I am an idiot. I was walking through a protest and didn't even realize it.  Approximately 50,000 protesters went to the Tory headquarters to protest the proposal to increase university tuition among other education cuts. The Tories are the conservative party in the UK and their headquarters are at 33 Millbank...less than a block from my hotel. This article gives a little more context, but in a country that most people perceive as safe, this was probably the closest I was to to any sort of danger. https://www.theguardian.com/education/2010/nov/10/student-protest-fees-violent

My personal feeling that it was safer than when I previously visited.  Perhaps it was because last time I was naive and now my eyes are wider to the world, but I honestly don't think so.  I didn't go out by myself but I was walking around downtown Cairo with my female friend with no issue even after dark. Compare this to my trip to Morocco last year where I got repeatedly heckled/harassed in broad daylight for being a western world female. (note: not in a threatening manner)
I would be comfortable to tell someone to go to Egypt, but would recommend that only to people who had traveled outside the US before until maybe a year from now.  I say that because this seems to be the major year in tourism where Egypt is rebounding. They are still working out the kinks to bring all the tourists back and a year would help with some of the comfort items while they get back up to the level from the height of tourism.  That being said, someone who is a fairly competent traveler can take advantage of this year to beat the throngs of tourists that will inevitably be back next year and enjoy the sites without a crush of people.

Let's talk about Egypt's challenges from a tourist perspective if you are thinking about a trip there:
Traffic - Absolutely awful. I think it got worse in Cairo but I can't really be sure. I lucked out with most things for timing, but the driving is terrible and it takes forever to go anywhere. You can't accurately plan timing based on the traffic.
Sanitation - You shouldn't drink the water and that rule then extends to anything raw that you would wash in water like vegetables.  In addition, the sanitation practices in some restaurants are not always the best. You have to be cautious. I have been fortunate on both visits to Egypt to not get sick but that was due to vigilance.
Climate - Egypt is almost all desert and I've seen some stats that it is the sunniest and driest places on the earth.  Great for taking photos and not having to pack rain gear.  Tricky for trying to avoid sunstroke and dehydration especially when you can't drink the water.
Aggressive street vendors - The vendors in Egypt have always been pushy. It was much worse this time where I couldn't even stop and think for a second. At one point the vendors were harassing my Egyptian companions too. It's annoying, but not threatening and understandable why they might be a little more desperate after seven years of low tourism.
Hotel quality - This two-fold.  The hotels are affordable right now. But, because of the crisis the past 7 years, you should lower your expectations. There haven't been any upgrades or improvements done because the hotels simply don't have the money to invest. I found the hotels to be clean but needing maintenance.

All things considered, don't let the challenges deter you from going to Egypt either now or in the future. Egypt is an amazing country with friendly people and unbelievable sights.  But bring a good book and some tunes to relax while you are inevitably stuck in traffic. :-) 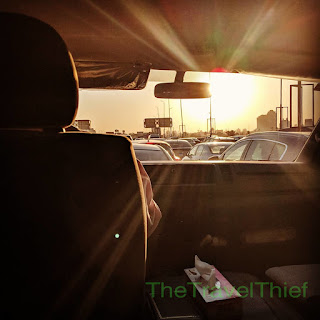