One of the first things I research for any trip is WHAT AM I GOING TO EAT?  I was slightly worried about Egypt since I try to eat healthy and planning to eat raw fruits/vegetables was not a solid option. Fear not!  Egypt has a Mediterranean cuisine with an African flair and you won't have to spend your entire vacation eating bread and chicken kebabs (though you should totally eat those too!)

It's also worth mentioning that Egypt is a Muslim country and you are not going to find pork anywhere. The cured meats found on your breakfast buffet at the hotel or cruise ship are beef or turkey versions.

Here are some of the things I've eaten in Egypt and you should try too! *Or not try. You do you.


Tameya - I love this stuff.  Basically it's falafel, but using fava beans instead of chickpeas that are commonly used.  They are more often in the patty form that the ball form from what I've seen and they are greener in color than falafel for some reason.  I also find Tameya to be lighter and less dense.  Finally, there is definitely more cumin used which gives it a really rich flavor.

Ful - AKA Ful Medames. I guess I love fava beans because I love Ful too.  I pity the fool who doesn't love Ful! Very simply, it's cooked fava beans with different seasonings depending on the variation. I seem to order the "Alexandria Style" which might be favas, garlic, onion, tomatoes, lemon juice, cumin/tumeric/cinnamon/cayenne/clove/chili.  It's thought to have originated in Egypt and spread to other Arab countries.  Pro tip: You can eat it for breakfast which is fantastic if you are like me and don't have a sweet bone in your body.

Koshari - I didn't eat it this most recent trip but chowed down back in 2011.  It's billed as being a practical dish using up pantry staples, but in my opinion this is the ultimate late night binge comfort food. It combines lentils, rice, pasta, chickpeas, tangy tomato sauce and topped off with crispy onions.  Take that green bean casserole!

Konafa - I had something similar when I visited Turkey for the first time.  You'll see it spelled a variety of different ways throughout the middle east: kanafeh, kunefe, knafeh, kunafa etc.  The common theme is that it is a cheese/dairy center surrounded by a sweet shredded dough. The Egyptian version I had was not very sweet but the sugar was still granulated which I liked for the texture. 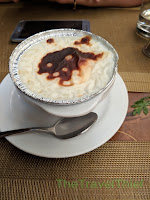 Roz bel laban - Egyptian Rice pudding. It has a few variations when I look up the recipe - like using rose water or orange blossom water to sweeten it - but there's something appealing about the Egypt version.

Umm Ali - Bread pudding.  My Egyptian twin sister (My sister in honor only, we were born 10 days apart and are the same personality!) pushed me to have this even though I don't have much of a sweet tooth.  I have to say, even in 100 degree heat, warm, buttery, creamy bread pudding was highly enjoyable. It's made using puff pastry and has coconut flakes in it which makes it a little different than the bread pudding we're used to in the US.

Aish Baladi - Egyptian flatbread.  Eat this with everything.  It's a puffy pita made with whole wheat flour baked in stone ovens and it's what you're going to use to sop up anything liquid-y that you put on your plate (Hummus). 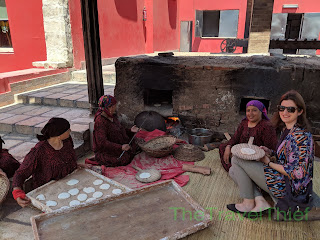 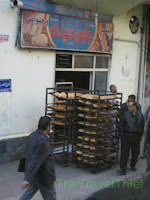 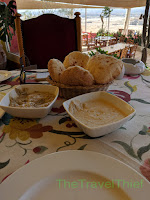 Baba ganoush - The smoky eggplant and tahini (sesame paste) dish common in Mediterranean cuisines. I just googled to see if there was anything different about the Egyptian version.  There isn't, but I found the Arabic term/translation is somewhere along the lines of "pampered daddy"...So Baba ganoush is pimp dip???


Mahshi - This is one thing that I was ignorant of both times I went Egypt. I associate stuffed grape/vine leaves with Greek cooking only.  Both trips to Egypt I had stuffed grape leaves (rice, herbs lemon) and then this time I also had stuffed zucchini, eggplant and pepper versions. A delicious and healthy Egyptian dish! 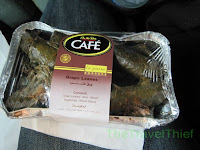 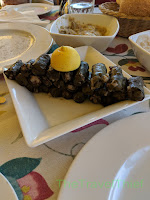 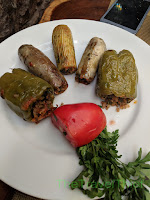 Pigeon - Yes, pigeon.  This was more of a tasting of the Hub's grilled stuffed pigeon he ordered.  Unsurprisingly, it follows the "it tastes like chicken" as a tiny bird. You're normally served 2 at a time because they are small.  My thought that it was too much work to eat because there isn't much meat on it and it is mostly rice that adds heft to the dish. I'm OK to pass on this dish.
When I was in Egypt this time, one of my Egyptian companions was waxing romantic about the Cairo pigeon population.  We were on our way to Memphis in the evening and she dreamily looked at the rooftops of the buildings along the highway.  "I love this time of day" She said. "The sun is setting and all the pigeons are out from their cages".  She was right, it was quite pretty with the pigeons getting their evening exercise.  Plus, I've stopped thinking of pigeons as 'rats with wings' and started embracing their talents and contributions. [Stay tuned for a future post on Northern Ireland and Paddy the Pigeon to elaborate] 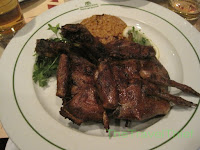 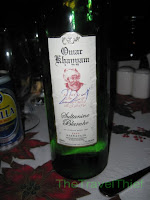 As mentioned, Egypt is a Muslim country but that doesn't mean that you can't drink.  What you might find surprising is that I found Dubai to be the most restrictive nation that I've traveled to so far in relation to alcohol.  That being said, your choices are going to be limited and it's going to be expensive (relatively).

Wine - There is actually wine grown and produced in Egypt!  It's not great, but it's not terrible either. Here is the major producer: http://www.alahrambeverages.com/brands/omar-khayyam/ 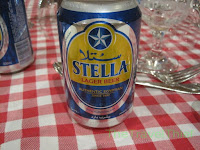 Beer - There is Stella and there is Stella.  No, not that Stella.  This Stella.  Any other Egyptian beer you might find is likely worse (Sakara). It's hot as hell in the desert and this is the best you are going to get. Drink it and move on. 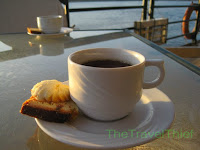 Tea - Tea is the national drink of Egypt. This isn't surprising given the fact that alcohol isn't high on the list for most residents and Middle Eastern countries have a strong tea culture. What you are going to find is standard black tea.  You can also get it with mint added but I don't think it compares to Moroccan mint tea.  I didn't see milk on offer to add to the tea but I also wasn't looking for it.  You will always be served sugar with it and perhaps a sweet treat to accompany it!


Coffee - Given the tea culture, color me surprised that there was also a coffee culture.  There's Turkish style coffee, Americano, espresso, cappuccino etc. Now that we've drank our coffee and tea, should we be worried about the water used to make it?  The answer is...oops!  I didn't even think about it! when I was there last.  Truth be told, the places where you're going to most likely be drinking it (hotels) have already gotten the process down for tourists.


Juice - Thinking about Egypt as being a desert, tropical fruits don't immediately spring to mind.  Yet, there are tons of fruit and fruit juice options available because the climate is actually perfect thanks to irrigation to water the plants.  Egyptian mango juice is a favorite of mine, but other options include pomegranate and sugar cane.  The sugar cane was way too sweet for me but I can't deny that it was refreshing to try on a hot afternoon in the city. 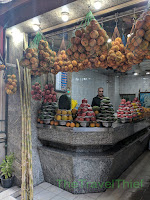 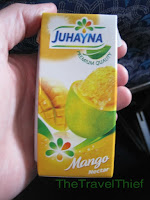 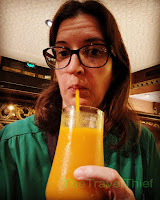 OTHER
You can also eat things that are not the "traditional" food in a destination. Two things I saw a lot were pizza (not surprising) and smoked salmon (pretty surprising!). I also love to see what different kind of snack flavors there are, like these kebab flavored chips. 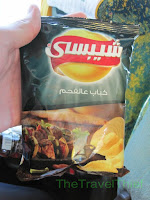 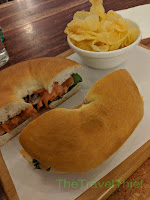 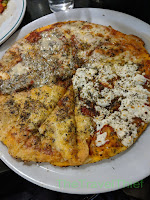 What else do you like to eat when you visit Egypt or the Middle East?
Posted by E on September 03, 2018