Hong Kong (or officially Hong Kong Special Administrative Region of the People's Republic of China) is the fourth most densely populated region in the world. It spans over 200 islands and is built on reclaimed land or hilly terrain.  The Hong Kongese have developed every way imaginable to get around the city with these challenges, including the longest escalator system in the world.

The Central-Midlevels escalator is 800 meters long in total and is located (you guessed it) in the Central Business district, linking up to the Mid-levels on Hong Kong Island.  I did not fully do my research ahead of time and the suggestion to see (via tourists websites and a local) was taken without a second thought.
First, I didn't realize that it was not one or a handful of long escalator. It's actually 18 escalators spread out along the way.  Second, I thought they were older than they were. The escalators were built in 1993, not sometime during the postwar population boom as I incorrectly assumed.  And finally, while it is neat that the escalator is reversed overnight to go back down the mountain, there isn't anything particularly interesting about the escalator construction itself. There's actually a spiral escalator in Hong Kong Times Square which would have been a more impressive escalator to see.

The moral of the story is that I completely missed the point of seeing the escalators. The journey for a tourist is to give you a peek into the different areas and levels of Hong Kong Island and you get off along the way to enjoy shops and restaurants. We rode the escalator after we had already walked through the hilly streets because I am simultaneously someone who enjoys seeing all the nooks and alleys in a destination as well as being a jerk who makes my husband walk everywhere.

Oh well, lesson learned. At least there was a pretty view. 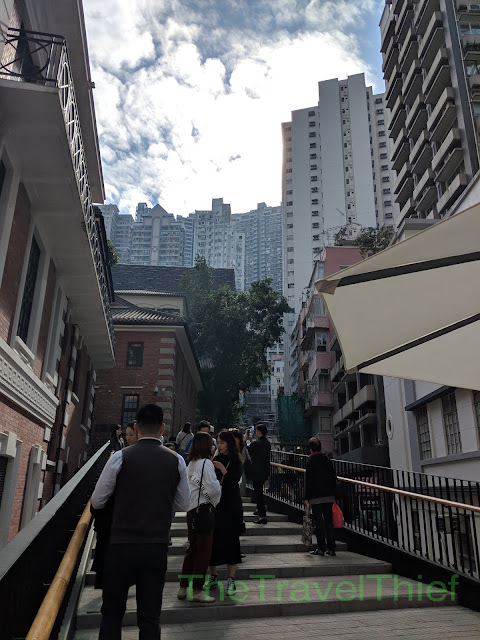